COVID-19 has sparked challenges across the globe – some on unfathomable levels financially, economically and medically. It’s even being labelled as “the severest shock to the economy since World War II.”

There’s a lot of doom and gloom right now. You only have to log in to the news or Twitter to see how much of an endless feed there is about the panic, fear and destruction it’s causing. But it’s not all bad news. Some positives are happening out there, and in this article, we’re going to highlight one of them.

The air quality lingering over Europe and China has already improved – even if just temporarily. And for experts working in the climate change field, this is proving that a shift in behaviour could be the solution for solving the climate crisis in the future.

Across the board, human activity has decreased significantly, as lockdowns continue to be put in place by national governments, and countries go into isolation. But while we’re all coming to terms with quarantining ourselves, the environment around us is taking a fresh breath of air.

According to NASA and the European Space Agency (ESA) satellites have recorded a significant reduction in pollution from January through to February. 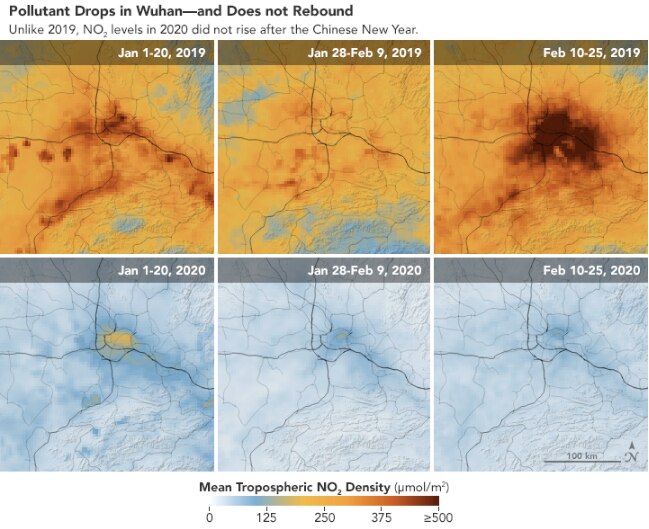 These images show a decrease in nitrogen dioxide, which is directly caused by the use of cars, power plants and industrial sites.

These agencies then put them side by side with images from Wuhan before the lockdown began and afterwards – specifically on 23 January compared to 10-25 February (during quarantine). The initial decrease started in Wuhan (the epicentre of COVID-19) and spread throughout China afterwards.

It’s expected 10-30 per cent in pollution has been reduced across China, and for researchers, this is astonishing.

Fei Liu from NASA said: “This is the first time I have seen such a dramatic drop-off over such a wide area for a specific event.”

Other researchers say that the reduction in pollution might contribute towards saving more lives than the actual toll from COVID-19 itself (in China alone).

To put that into perspective, scientist Marshall Burke from Stanford University thinks the reduction in air pollution could have saved up to 77,000 lives in China, for those under the age of five, and individuals over 70. That’s still something worth celebrating.

In his blog G-FEED, Burke noted that the evidence is clear – breathing in dirty air is responsible for “heavily to premature mortality.”

“The question is whether the lives saved from this reduction in pollution caused by economic disruption from COVID-19 exceeds the death toll from the virus itself,” he added.