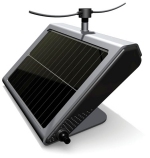 Rainwater tanks are a common feature in homes throughout Australia, but the low water pressure they provide means that watering usually needs to be done with the assistance of an electricity-hungry pump – and using sprinklers with pumps can present some problems. Enter the Solar Sprinkler.

Alex Cashmore, a student at the University of South Australia, has entered his invention in this year’s Australian Design Awards.

When water reaches the Solar Sprinkler, it triggers a pressure switch that turns an electric motor on; powered by a solar panel embedded in the body of the sprinkler. If enough solar energy is available, the sprinkler arms will rotate rapidly and create a centrifugal pumping action, throwing out water in much the same way as a normal sprinkler connected to mains water supply does.

If suitable levels of sunlight are not available, an automatic valve stays closed, stopping the water from flowing out of the sprinkler arms unnecessarily and allowing the sprinkler to remain connected while unattended.

Mr. Cashmore says functional prototypes have already been developed and performance of the sprinkler has been tested and proven.

While other forms of solar powered water pumping are more suitable for irrigating larger areas, the Solar Sprinkler certainly shows some promise as an alternative to mains electricity powered pump driven irrigation in small residential gardens. Aside from the electricity consumption issue, pumps exert considerable amounts of pressure and if the wrong sprinkler is used, it can create back-pressure on the pump; shortening the life of the unit or causing the pump casing to crack.

An issue the current design doesn’t address is the gardening wisdom of watering in the cooler parts of the day during the summer months in an effort to ensure plants and lawn get the most benefit from watering instead of much of it evaporating. Perhaps future versions of the Solar Sprinkler may incorporate a small deep cycle battery that can be charged during peak sunlight hours; allowing the sprinkler to be used shortly after dawn and at dusk during the hotter parts of the year.