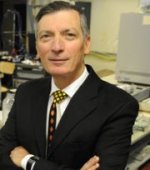 Liquid metal battery technology with a super-secret special sauce being developed at Massachusetts Institute of Technology (MIT) could revolutionise electricity storage on wind and solar farms.

The battery, brain-child of MIT’s Professor Donald Sadoway, is based on low-cost readily available liquid metals that the professor and others believe could make current cost barriers involved with large-scale energy storage a thing of the past.

The U.S. Government has seen the potential of the liquid metal battery technology and ARPA-E (Advanced Research Projects Agency, Energy) has given Sadoway’s project $7 million over five years to develop the system.

While the materials used are being kept secret at this stage, the basic principle is to place three layers of liquid inside a container; two of which consist of different metal alloys and one a layer of salt. Interactions between the two liquid metal alloy layers result in a flow of electrical current. While charging, electrically charged ions collect at one terminal, when discharging, at the opposite terminal.

In order for all the layers to stay molten, the battery must be kept at a very high temperature of around 700 degrees Celsius, the energy for which is sourced from the electrical current within the battery, so no external heat source is needed.

While liquid metal batteries certainly aren’t new, most have only one liquid metal component. Thesolid component Professor Sadoway says is equivalent to a speed bump and detrimental to a battery’s performance. Other liquid batteries have been developed called flow batteries, using a very different approach. Molten salt batteries are also in usage, but those store energy as heat, rather than as electricity.

While laboratory tests have been encouraging, more need to be performed to ensure the technology is scalable to an industrial size. If it is, Professor Sadoway says it will allow for the construction of liquid metal batteries “of a size never seen before”.