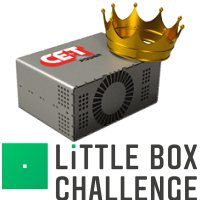 As far as inverters go, it may not be sexy; but it’s tiny, powerful and just won a million dollar prize in Google and IEEE’s Little Box Challenge.

Challenge participants were required to develop a kW-scale DC -> AC inverter with a power density of at least 50 Watts per cubic inch.

Hundreds entered the Challenge and 18 teams made it through to the finals. The winner selected by judges from Google, IEEE Power Electronics Society and NREL was Belgium-based CE+T Power’s Red Electrical Devil team.

Boasting a powerful 145W per cubic inch, the Red Electrical Devil’s inverter is just 13.77 cubic inches in size; well under the minimum in the competition criteria. The inverter passed 100 hours of testing carried out by the National Renewable Energy Laboratory (NREL).

The company was awarded the $1 million prize at the ARPA-E Energy Innovation Summit in Washington D.C.

To say the CE+T Power team were quite chuffed is probably somewhat of an understatement.

“Winning the Google Little Box Challenge presents us with a unique head-start to address the crucial improvements required in power backup,” said CE+T Power CEO, Robert Eyben. “We identified some critical and necessary design alterations and through this innovation, we will change the future of electricity, power and even Smart Home technology.”

Google was very pleased with the standard of entries.

“Impressively, the winning team exceeded the power density goal for the competition by a factor of 3, which is more than 10 times more compact than commercially available inverters!,” said Ross Koningstein, Engineering Director Emeritus, Google Research.

” When we initially brainstormed technical targets for the Little Box Challenge, some of us at Google didn’t think such audacious goals could be achieved. Three teams from around the world proved decisively that it could be done.”

The technical approach documents for CE+T Power’s can be viewed here (PDF) and those of other finalists can be downloaded from the Little Box Challenge web site.

In conventional solar power systems, inverters convert the DC (Direct Current) electricity generated by solar panels into AC (Alternating Current), suitable for use by home appliances and for exporting to the mains grid.