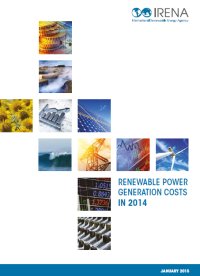 The International Renewable Energy Agency (IRENA) says the cost of generating power from some renewable energy sources has reached parity or is cheaper than cost of fossil fuels.

The Renewable Power Generation Costs in 2014 report states biomass, hydro, geothermal and onshore wind are all competitive with or cheaper than coal, oil and gas-fired power stations – and that’s even without subsidies.

Individual wind projects are consistently generating electricity for USD 0.05 per kilowatt-hour without financial support, compared to  USD 0.045 to 0.14/kWh for fossil-fuel power plants.

Solar PV is rapidly closing the gap; with solar panel costs falling 75 per cent since the end of 2009 and utility-scale solar PV electricity generation costs plummeting 50 per cent since 2010.

Residential solar power systems are now as much as 70% cheaper than in 2008.

Between 2010 and 2014, the average LCOE (levelized cost of electricity) of residential solar power systems in Australia declined by 52% and residential electricity price parity has been reached in parts of the nation. The report states the LCOE of solar PV in Australia is highly competitive due to the country’s excellent solar resources.

“Now is the time for a step-change in deployment for renewables,” said Adnan Z. Amin, Director-General of IRENA. “It has never been cheaper to avoid dangerous climate change, create jobs, reduce fuel import bills and future-proof our energy system with renewables. This requires public acknowledgement of the low price of renewables, an end to subsidies for fossil fuels, and regulations and infrastructure to support the global energy transition.”

The report says there are no technical barriers to the increased integration of variable renewable resources.

” At low levels of penetration, the grid integration costs will be negative or modest, but can rise as penetration increases. Even so, when the local and global environmental costs of fossil fuels are taken into account, grid integration costs look considerably less daunting, even with variable renewable sources providing 40% of the power supply. In other words, with a level playing field and all externalities considered, renewables remain fundamentally competitive.”

In terms of small scale off-grid and remote power, renewables now offer the best economic solution compared to diesel-fired generation – and this is  despite the reduction in oil prices at the end of last year and the beginning of 2015.

The International Renewable Energy Agency (IRENA) is the global hub for renewable energy cooperation and information exchange. It consists of 138 members (137 States and the European Union), including Australia.

Renewable Power Generation Costs in 2014 can be downloaded here (PDF).