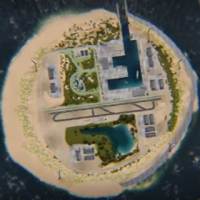 An ambitious plan to build an artificial island in the North Sea that will act as a renewable energy hub looks set to go ahead.

On March 23, the Netherlands’ TenneT TSO B.V., Denmark’s Energinet.dk and Germany’s TenneT TSO GmbH will ink a deal that will see a large renewable European electricity system established in the North Sea.

Central to this plan is the construction of “Power Link Islands”. Between 70,000 MW to 100,000 MW of wind farms could be connected to these islands; with transmission cables running to the Netherlands, Denmark, Germany, Great Britain, Norway and Belgium.

The alternating current generated by the wind farms will be converted at stations on the island to direct current for transmission. Using direct current connections also as interconnectors will boost the efficiency of these connections from roughly 40% towards 100% says TenneT.

Through the project, wind energy generated long distances from the shore will assume the cost benefits of near-shore wind power.

“This project can significantly contribute to a completely renewable supply of electricity in Northwest Europe,” said Mel Kroon, CEO of TenneT. “TenneT and Energinet.dk both have extensive experience in the fields of onshore grids, the connection of offshore wind energy and cross-border connections.”

The first artificial island will cover around 6 square kilometres and incorporate an airstrip, harbour, worker accommodation and various workshops. It will be able to support around 30GW of connected wind farms.

The island will be situated on Dogger Bank; a huge area covering approximately 17,600 square kilometres and with a depth ranging from 15 to 36 metres. The shallow nature of the region will reduce the costs of building the island and surrounding wind farms. This part of the North Sea also has significant and reliable wind energy resources.

“In short, an island in the middle of the North Sea offers everything necessary to make offshore wind energy a success,” says TenneT.

The artificial islands are part of a larger plan, the North Sea Wind Power Hub project, announced by TenneT in June 2016.