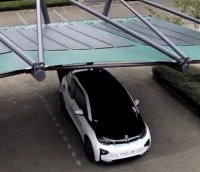 The Solar Cloth Company, based in the UK, has developed an award-winning solar solution for non-load bearing roofing and car parks.

The firm produces lightweight, flexible thin film photovoltaic (TFPV) solar panels that weigh less than 3.3kg/m2 – ten percent of the weight of traditional glass-face solar panels. The Solar Cloth Company states the panels can be installed on almost all low-load bearing structures or bonded to most structural fabrics.

Just in the UK, there’s an estimated 834 million square metres of non-load bearing roofing and 353 million square metres of car parking – a huge area that could be used to generate power. If this area was fully utilized, it would represent 120GW of clean electricity generation capacity – more than three-times the energy required to power the UK’s National Grid.

With electricity prices in the UK gradually creeping up, the company says its solution is also cost-competitive.

“By 2020, the wholesale price of electricity is predicted to rise as high as 14p/kWh, whereas our lightweight, flexible solar panels are estimated to have a Levelised Cost of Energy (LCOE) as low as 8p/kWh over the same period.”

The company believes the market for its product will be worth over £1 billion within a decade.

The Solar Cloth Company was a winner in the recent Solar UK Industry Awards 2014 and  has been selected as a finalist in Cleantech Innovate 2015: BIPV Solar Innovation of the Year.

The firm is currently collaborating with the University of Cambridge and other leading European Universities for projects to create ultra-low cost TFPV; and is seeking an investment of £750,000 is to expand it production facilities and sales teams to deliver its 2015 sales pipeline.