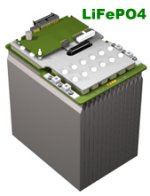 Off-grid solar power system owners contemplating the use of lithium batteries for energy storage will be encouraged by results of recent testing.

A joint research project between the University of Southampton and lithium battery management systems producer REAPsystems has found LiFePO4 (lithium iron phosphate) batteries have the potential to improve the efficiency and reduce the cost of solar power.

A lithium iron phosphate battery was used in conjunction with a solar power system installed on one of the University’s buildings.

The weight of lithium batteries is also much lower. For example, a 12 volt 20 amp-hour LiFePO4 weighs around 3.5kg, whereas the same in a Sealed Lead Acid deep cycle battery could weigh as much as twice that.

LiFePO4 batteries have a longer life span than the lead-acid batteries; reaching up to 1,600 charge/full discharge cycles according to the researchers, although some manufacturers claim up to 2,000 charge/discharge cycles.

Off-grid solar owners tempted to race out and buy LiFePO4 batteries need to be aware that a special charging system is required and perhaps such a purchase is a little premature.

The University says the battery will need further testing before being put into commercial photovoltaic systems, but so far research has shown “that the LiFePO4 battery has the potential to improve the efficiency of solar power systems and help to reduce the costs of both their installation and upkeep.”

Lithium based batteries of a different kind for backup energy storage for grid-connected home solar power systems are about to become a reality. As we reported in January, Kyocera Corporation recently announced it will be rolling out an energy management system (EMS) in Japan this year; combining Kyocera solar panels, inverter and related components with Nichicon Corporation’s high-capacity lithium-ion battery storage units.