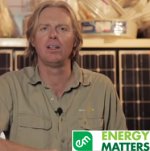 With a slew of solar panel manufacturers producing modules – and with varying degrees of competency – it’s important for consumers to know what to look for when selecting solar panels.

The promotional blurbs and specifications sheet for any solar module can be enough to set the average person’s head spinning. Copious quantities of jargon can be used and all types of claims made; so Energy Matters has created a short video to help simplify selecting solar modules and to highlight the fact not all solar panels are equal.

The video also highlights an important issue concerning warranty. While most module manufacturers offer 20 – 25 years warranty, the devil is in the detail and whether many of these manufacturers will exist in even 2 years from now remains to be seen.

The solar industry has seen massive growth in recent years and many companies have jumped on the solar panel manufacturing bandwagon; a bandwagon that will increasingly eject passengers as the stronger companies increase their market share and the industry consolidates.

A solar power system is a substantial investment, and like any investment should be considered carefully. Purchasing the right system can reap substantial financial returns; but the wrong system may bring nothing but headaches and disappointment.

The video is an adjunct to Energy Matters’ other free guides, which include “Tips For Choosing Solar Panels – Cost Is Only One Factor” and A Consumer’s Guide To Solar Power. Earlier this year, the company also released a similarly titled video relating to another important solar power system component – Not All Solar Inverters Are Equal.