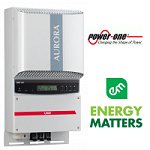 According to national solar provider Energy Matters, the bonus from Power One also applies to all Power-One inverters purchased as stand-alone items. With the additional coverage, total inverter warranty time for systems and units purchased in December will be 10 years.

A transformerless design providing up to 97% efficiency, the Aurora has a wide operating range; meaning these inverters are ‘early to wake and late to sleep’.

Power-One has a 40 year history in developing power supply products for a variety of sectors and recently became the world’s second largest manufacturer of solar inverters. Power-One is headquartered in California and has offices, manufacturing, and R&D operations in Asia, Europe, and the Americas.

While solar panels tend to capture the most attention when shopping for a system, the quality of the inverter is a critical aspect. The best solar panels in the world will be hamstrung by a poor performing inverter and consequently system payback time can be greatly extended. Subject to severe operational stresses, solar inverter design must also be solid in order to ensure a long and uninterrupted working life.

As with inverters, not all warranties are created equal and a long warranty doesn’t necessarily guarantee rapid turnaround in the unfortunate circumstance of an inverter experiencing problems. To enhance warranty arrangements for Australian customers, Power-One also recently announced it would despatch a replacement for a faulty inverter within 2 days of a Return Merchandise Authorisation (RMA) being generated.

While the Solar Credits subsidy will be slashed 50% for systems installed after December 31, customers ordering solar power systems from Energy Matters now will have the price guaranteed; even if installation doesn’t occur until January.