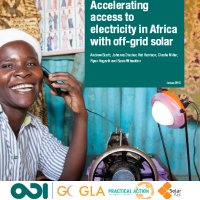 Of all the people around the world without access to electricity, nearly 50% live in Africa – and most are in rural areas.

Solar power has emerged as a real solution to the rural electrification challenge and is now the cheapest source of electricity for more than one-third of Africa’s population; a figure that will continue to rise as solar prices plummet.

According to the reports, rural families throughout Africa spend around 10% of their household income to provide just 4 hours of light at night using kerosene lamps, torches or candles.

However, families with a single solar light save more than $60 a year; spending just 2% of their household income on lighting. Additionally, switching from kerosene to solar lighting can reduce annual household emissions by as much as 555kg carbon dioxide equivalent annually.

The reports indicate a series of health benefits from switching to solar including a decrease in respiratory issues, burns and kerosene poisonings. Off grid solar is also improving health services with better lighting and reliable refrigeration of vaccines and other medical supplies.

The improved quality and quantity of lighting provided by solar is also creating additional income opportunities by increasing the time available for productive work.

Solar is becoming a significant employer on the continent – up to 15,000 new jobs have been created in sub-Saharan Africa through the distribution of off-grid lighting alone.

Children’s educational prospects are also being enhanced. Where a family acquires a solar light, children increased their study time on average from 1.7 to 3.2 hours each night.

It really is amazing how much positive change a rural African family can experience through the use of a single solar powered light. It’s been encouraging to see the level of uptake – but it can be accelerated.

As part of the reports project, a simple model was developed to understand what it would take to achieve universal access to electricity in Africa by 2080, 2030 and 2025. In order to achieve the most desirable outcome, 2025 (the Power For All scenario), nine key measures will need to be implemented; being:

The reports, prepared for the Department for International Development in support of preparations for the Energy Africa campaign, can be viewed in full here.