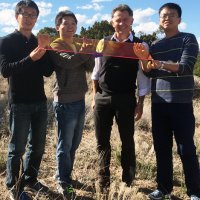 We first mentioned the project in March – and it looks like the team has been enjoying some success.

The technique relies on layering highly photosensitive nanostructures onto light-absorbing plastic slabs called luminescent solar concentrators (LSCs). These have the ability to absorb light and re-emit it at much higher intensities.

As sunlight strikes the surface of the LSC, a film of quantum dots called fluorophores captures and redirects photons by internal reflection to a photovoltaic collector located at the edge of the device.

In a paper published in the journal Nature Energy, the researchers demonstrate how these devices can be scaled up to create windows large enough to power buildings.

“We are developing solar concentrators that will harvest sunlight from building windows and turn it into electricity, using quantum-dot based luminescent solar concentrators,” said lead scientist Victor Klimov, head of the Los Alamos Centre for Advanced Solar Photophysics (CASP).

Borrowing a method from screen printing, the Los Alamos team created LSC windows using a technique called “doctor-blading”, whereby a volume of quantum dots suspended in liquid is poured over a blank slab and a blade wipes the excess slurry off, leaving a thin, uniform film behind.

Previous research into LSC technology has focused on organic dyes and altering the nanostructure of the glass or plastic slabs, but has yet to achieve the elusive concentrated photovoltaic (CPV) industry standard of 100 suns – one sun equalling the measure of solar radiation at noon on a sunny day.

But the widely-tuneable nature of the quantum dots used in the Los Alamos LSCs allows for almost 100 percent emission efficiencies, and high photostability. They are constructed from semiconductor spheres with a core of one material and a shell of another, which allows their absorption and emission spectrums to be tuned to different parameters.

This solves the issues of self-absorption of sunlight in LSCs, which can drastically reduce the power output of the device.

“This tunability is the key property of these specially designed quantum dots that allows for record-size, high-performance LSC devices,” Klimov said. “Semitransparent LSCs can also enable new types of devices such as solar or photovoltaic windows that could turn presently passive building facades into power generation units.”