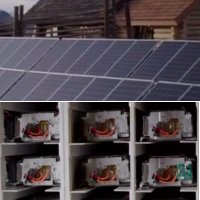 The 40kW solar power system charges 208 repackaged battery packs recovered from Toyota dealers across the United States. The battery packs have been internally re-wired in parallel and arranged in series in four arrays of 52. Each provides a nominal 375 volts and all packs combined offer a total storage capacity of 85kwH.

The battery management system developed specifically for the project will provide insights to assist Toyota in enhancing future battery performance and durability.

While the system provides more than enough power for the Lamar Buffalo Ranch campus as it is, a 40kW propane backup generator is onsite for emergency use.

“Toyota’s innovative response to solve a difficult problem has helped Yellowstone move closer to its goal of becoming the greenest park in the world,” said Steve Iobst, acting superintendent of Yellowstone.

The Yellowstone project is an example of how EV batteries can be repurposed when reaching the end of their service life with regard to their original application. A battery pack in this condition can still store around 80% of its original charge; making it ideal for less demanding applications such as residential or even commercial energy storage for solar power. The batteries can then be repurposed yet again for even less intensive applications, before finally being recycled.

Toyota engineers believe this type use of could double the overall lifespan of the hybrid Camry batteries.

The Lamar Buffalo Ranch was created in 1907 to preserve one of the last free-roaming bison (buffalo) herds in the United States. The species was driven to the edge of extinction through commercial hunting and the introduction of bovine diseases from domestic cattle. Starting out with just 28 bison, the population at Lamar Buffalo Ranch has grown to 3,700 animals in two major sub-herds.