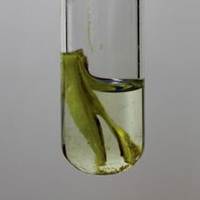 In a world first, scientists from the University of Cambridge have developed a method of using ambient sunlight to extract usable hydrogen fuel from abundant biomass waste, including paper, wood and leaves.

Until now, converting biomass waste into hydrogen has been an energy-intensive task because the main component of plant matter – lignocellulose – is extremely difficult to break down, requiring high-temperature gasification processes to achieve.

“Lignocellulose is nature’s equivalent to armoured concrete,” said Dr Moritz Kuehnel, from the Department of Chemistry at the University of Cambridge, joint lead author of an associated research paper published in the journal Nature Energy.

“It consists of strong, highly crystalline cellulose fibres, that are interwoven with lignin and hemicellulose which act as a glue. This rigid structure has evolved to give plants and trees mechanical stability and protect them from degradation, and makes chemical utilisation of lignocellulose so challenging.”

Even with this challenge, lignocellulose is very attractive as a resource as it’s Earth’s most abundant form of biomass.

Instead of tinkering with gasification, the Cambridge team trialed a photocatalyst in an alkaline water solution. Composed of photo-sensitive nanoparticles, when placed in front of a laboratory bulb that mimics sunlight, the catalyst causes any biomass particles suspended in the solution to form gaseous hydrogen that is then collected in the headspace of the container.

In their experiments, the researchers used various types of unprocessed biomass. Wood, paper and leaves were all placed in the system with successful results. They reported the hydrogen fuel produced was free of fuel-cell inhibitors such as carbon monoxide, meaning it could be used for power.

“There’s a lot of chemical energy stored in raw biomass, but it’s unrefined, so you can’t expect it to work in complicated machinery, such as a car engine,” said joint lead author, Dr David Wakerley.

“Our system is able to convert the long, messy structures that make up biomass into hydrogen gas, which is much more useful. We have specifically designed a combination of catalyst and solution that allows this transformation to occur using sunlight as a source of energy. With this in place we can simply add organic matter to the system and then, provided it’s a sunny day, produce hydrogen fuel.”

The team plan to bring the technology to market, utilising Cambridge’s commercial arm Cambridge Enterprise. They predict the system could be developed for small off-grid hydrogen fuel generators or scaled up to industrial-sized plants.

“Our sunlight-powered technology is exciting as it enables the production of clean hydrogen from unprocessed biomass under ambient conditions. We see it as a new and viable alternative to high temperature gasification and other renewable means of hydrogen production.”