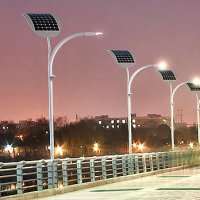 The world’s first solar-kinetic street lights will be installed at Boulder Plaza in the city of Las Vegas.

There are more than 300 million street lights around the world, many of them powered by electricity generated from high carbon sources such as coal. Additionally, around 40% of the energy used is wasted through poor lighting efficiency; contributing to another environmental problem – light pollution.

Far from just being an eyesore, light pollution can also impact the migration and reproductive activities of some animals and boost air pollution through light’s interaction with certain chemicals.

Efficient solar powered lighting can provide a solution to some of these issues.

EnGoPlanet’s Street Light is an off-grid LED lighting solution, powered by combining energy harvested from pedestrian’s footsteps and the sun.

When a pedestrian steps on a kinetic tile situated near the base of the light, energy is created that then charges a battery. 180 watts or 360 watts of high-efficiency solar cells embedded on the light’s cowling also provide charge.

The product does more than just provide light.

“If you look at traditional street light poles, you will see that they are useless. They simply hold the lighting,” said Petar Mirovic, CEO of EnGoPlanet.

” With our solution, we’ve changed that by incorporating useful features into the pole and transforming it into a free service spot where people can rest, charge their portable devices, or connect to WiFi.”

It can also be equipped with sensors collecting real-time data on traffic, weather and other environmental conditions that can be communicated back to a central base.

Solar lighting isn’t just green – it can save money. EngoPlanet cites the example of Odessa College in Odessa, Texas, which installed solar lights and saved around 20 percent of the cost of a conventional system due to the avoidance of wiring and trenching works. The College is now saving more than USD $8,000 per year.

The inspiration that resulted in the founding of EngoPlanet occurred during the aftermath of hurricane Sandy in 2012, during which half of Manhattan had no electricity for almost a week. Solar power played an important role during immediate response and clean-up efforts; with various initiatives including the Solar Sandy project and Greenpeace’s Rolling Sunlight providing assistance.