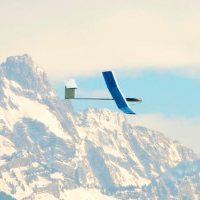 A Swiss team has broken an endurance record for unmanned aerial vehicles under 50 kilograms and for all low altitude long endurance (LALE) UAVs. Its featherweight drone, AtlantikSolar, flew continuously for more than 81 hours.

Wired reports the feat was also the second longest flight by an unmanned aerial vehicle ever – the longest being one by Airbus Defence and Space’s Zephyr 7 High Altitude Pseudo-Satellite (HAPS); also solar powered.

The test went very smoothly for the first 79 hours, including overnight stints that saw a low of 39% battery power remaining before solar recharging recommenced.

AtlantikSolar spent 99% of this time in autonomous loitering mode; but then things got a little bumpy. The craft faced thunderstorms and winds gusting to 60 kmh, but AtlantikSolar survived and the drone was safely landed using autopilot assisted mode.

Weighing just 8.6kg thanks to its carbon fibre and Kevlar structure, AtlantikSolar has a wingspan of 5 metres. Coating the wings are 1.4m2 of solar panels, which charge a bank of Li-ion batteries. The autonomous control system was designed by ETH Zurich. AtlantikSolar’s flights are recorded and streamed using a digital HD camera.

The impressive flight was just a warm-up for a far greater challenge – an attempt to fly 5,000km across the Atlantic Ocean; from Boston to Lisbon over seven days. Slated to occur in June 2016, this will be the first-ever Atlantic crossing of its kind.

The AtlantikSolar project is headed by ETH Zurich’s Autonomous Systems Lab, under the supervision of Professor. R. Siegwart. Other partners in the project include Super Computing Systems, Swiss Center for Electronics and Microtechnology, SkyGuide and MeteoSwiss.

ETH Zurich has been researching solar-powered UAVs for civil applications such as search and rescue since 2002. Another project of ETH Zurich’s Autonomous System Labs is SkySailor; which in 2008 was the first solar powered flight of more than 24 hours without the use of thermals.

Founded in 1855, ETH Zürich is an engineering, science, technology, mathematics and management university in the city of Zürich, Switzerland. The institution has more than 18,500 students from over 110 countries, including 4,000 doctoral students.