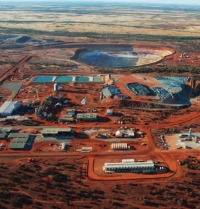 All going smoothly, Australia will soon be home to one of the world’s largest off grid solar power systems – and the largest of its kind globally in the mining industry.

Sandfire Resources NL says it has signed an agreement with juwi Renewable Energy Pty Ltd to construct a 10.6MW solar farm at its DeGrussa Copper Mine in Western Australia.

Located 900km north-east of Perth, the mine can produce up to 300,000 tonnes of high-grade copper concentrate annually.

Power at the facility is currently provided by a 20MW diesel power station, which will continue to operate as baseload supply. In addition to powering the mining related equipment, the power station needs to cope with the demands of air-conditioned and fully serviced accommodation for 600 workers.

The proposed solar power station will be comprised of 34,080 solar panels set on trackers to follow the sun, plus a 6MW battery energy storage system. It will be constructed on 20 hectares of land near the underground mine.

“The scale of this project will be an Australian and world first – a unique combination of an off-grid, high capacity solar power array which will be fully integrated with an existing diesel power station,” said Sandfire’s Managing Director, Mr Karl Simich.

“It has the capacity to significantly reduce our medium and long-term power costs, especially with further extensions of the mine life of the DeGrussa Project.”

Assuming the project goes ahead, Sandfire’s cash contribution will be less than $1 million; with the remaining estimated $39 million to be organised by juwi, which will own and operate the facility.

The DeGrussa Solar Power Project hangs on achieving financial close and meeting various other conditions by May 1.  Construction of the project is to commence during the second quarter of this year, with a goal of completing construction by the end of 2015 and commissioning occurring in the first quarter of 2016.

Utility-scale off-grid solutions for energy intensive remote applications such as mining appear to be a specialty for juwi. In 2013, the company acquired a majority stake in Brisbane based Qi Power Limited – a company with a extensive background in the Australian mining and power industry.

juwi recently reported it had exceeded 300 megawatts of installed wind and solar capacity in the Asia-Pacific region.  The company says Asia Pacific is the major global region for renewable energy and many markets have strong growth potential.