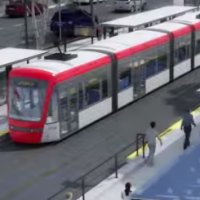 An electric light rail project linking Canberra’s Civic to Gungahlin in the north will be powered by 100% renewable energy.

According to the ABC, Capital Metro Minister Simon Corbell said the 100 percent target would be comprised of two elements.

The developer of the light rail project would need to source 10% of the service’s electricity requirements from renewables and 90% would come from the ACT Government achieving its own target of 90% for the Territory by 2020.

The ACT government appears confident that it will reach its 90% goal even though renewable energy supply was at 18.6 per cent in 2013-14. Mr. Corbell, this time with his Environment Minister cap on, said wind power alone would supply 52 per cent of the Territory’s needs by 2020.

“The combined output from the solar and wind farms already awarded feed-in tariffs through our reverse auctions, contributions from the national renewable energy target and output from the ACT’s installed rooftop solar panels, will account for around 60 per cent of the ACT’s electricity demand in 2020,” he said.

Capital Metro says the light rail project will deliver $1 billion in benefits to the community; including $222 million in transport time savings and more than 3,500 jobs supported during construction.

Canberra is expected to grow to a population of over 600,000 people by 2050 and already traffic congestion is a major issue in the nation’s capital. With light rail in place, it’s anticipated that public transport travel times would be over 30% faster than general traffic. The Gungahlin route was chosen to the first as the Gungahlin area is growing at five times the rate of the rest of Canberra.

The draft Environmental Impact Statement (EIS) for Capital Metro Stage One is now available for community comment as part of the project’s planning process. Capital Metro says it will hold a number of drop-in information sessions about the EIS during the public consultation period.