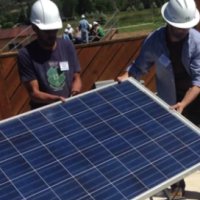 The saying goes that civilized society is only ever three square meals away from anarchy – and in the modern world, the same sort of concept can be applied to energy.

Jonathan Morgenstein was a  U.S. Marine Corps officer tasked with helping to rebuild Ramadi, Iraq in 2004. When Ramadi’s power lines were cut, chaos reigned; as did black markets for generators, fuel and water.

“Staring at Iraq’s powerful sun, it became clear to me that distributed solar electricity could play an extraordinary role in building a brighter future for the entire region.”

Mr. Morgenstein is applying his vision initially in another of the world’s trouble spots – the West Bank – through Empowerment Solar.

“By designing and installing distributed solar photovoltaic (PV) electricity systems, for small-and-mid-sized Palestinian businesses on the West Bank, we put electric and economic power back into the hands of everyday Palestinians, creating jobs and promoting a more prosperous and stable future,” he says.

As we’ve seen so often in the past in other regions, a little clean, reliable energy can go a long way in improving people’s lives.

The Palestinian electricity grid is anything but stable, with brownouts and blackouts commonplace. What electricity is available is expensive, costing Palestinian firms 10.3% more than Israelis and 64.3% more than in the USA. The State of Palestine only produces 445 million kilowatt-hours of electricity, which meets just 10 percent of its demand. It relies almost entirely on the Israel Electric Corporation to supply the deficit.

While around 70% of Palestinian households use solar hot water systems, solar power is yet to make huge inroads. Palestine’s solar resources are significant; so it’s a huge untapped resource. The region receives about 3,000 hours of sunshine per year and experiences an average solar radiation of 5.4 kWh/m according to EcoMENA. A target of 10% clean energy installed capacity by 2020 has been set.

Empowerment Solar needs to raise $50,000 to set up operations, train installers and develop its first solar project – and is using crowdfunding to do so. At the time of writing, just under $4,000 has been raised, with 38 days to go.