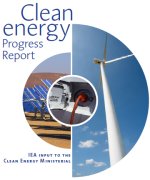 While clean-energy technology has moved ahead in leaps and bounds, it’s still being overshadowed by continued demand for fossil fuels; partly due to subsidies says the International Energy Agency.

According to the Agency’s first Clean Energy Progress Report, surging demand for fossil fuels is still outstripping deployment of clean energy technologies. The IEA’s finger has pointed at coal as the major culprit, which has met 47% of the global new electricity demand over the past decade

Aside from more aggressive clean energy policies being required, the IEA says fossil fuel subsidies should be removed and “transparent, predictable and adaptive incentives” for cleaner energy should be implemented.

“A number of countries have shown that achieving rapid transition to cleaner technologies is possible, and can be done from the bottom up. We must see more ambitious, effective policies that respond to market signals while providing long-term, predictable support,” said Ambassador Richard Jones, Deputy Executive Director of the International Energy Agency.

The report states renewable electricity generation globally grew an average of 2.7% per year since 1990, which is less than the 3% growth seen for total electricity generation. As a result of the continuing addiction to fossil fuels, achieving a goal of slashing global energy-related carbon dioxide emissions by half by 2050 will  need a doubling of all renewable generation use by 2020 from today’s level.

The organisation also calls on the deployment of highly controversial Carbon Capture and Sequestration (CCS) technologies, saying while there are over 70 CCS projects currently planned, there is uncertainty as to how many will be be rolled out because of recent delays in allocating public funding.

“Clean coal”, which incorporates CCS technologies, has come under heavy criticism given the uncertainty of the technology and the fact it actually requires more energy to produce the same amount of electricity as “regular” coal. This means more coal will need to be mined; adding to other problems associated with the fossil fuel such as general environmental degradation through mining operations, toxic coal ash and increased atmospheric mercury emissions.