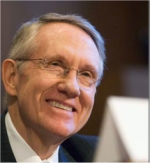 Taking a diplomatic sojourn in China this week alongside Australian Prime Minister Julia Gillard was Democratic Senate House leader Harry Reid – a man who would appear to understand the importance of renewable energy to a country’s economy.

Senator Reid led a bi-partisan delegation of US senators to the nation which the International Monetary Fund recently announced will overtake the US as the world’s economic superpower by 2016.

Unlike Ms. Gillard, who spoke primarily of how Australia could feed China’s huge appetite for emissions-intensive coal and natural gas, Senator Reid brought home a vision of a renewable energy-fueled economy, where America must emulate China by leading the world in exports for solar and wind energy generation technology.

It was the Chinese government’s aggressive renewable energy investment policies that had put it on the path to global green power dominance, the senator said. The strategy isn’t just paying off in green street-cred, but also in security and the country’s bottom line.

“With our vast renewable energy resources and American ingenuity, we can’t afford not to be a globally competitive. We should also look for new opportunities to collaborate on and advance clean-energy deployment here and abroad,” Reid said.