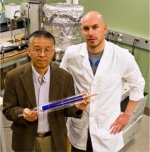 Solar thermal based electricity generation tends to conjures an image of a baking desert plain filled with shining mirrors; each reflecting and concentrating sunlight onto a collection point mounted at the pinnacle of a gleaming tower, where the concentrated sunlight’s heat is used to create steam and drive turbines that produce electricity.

A collaborative research team from the Massachusetts Institute of Technology (MIT) and Boston College have developed a small-scale thermoelectric solar device that uses flat-panel technology – much like conventional silicon photovoltaic solar panels – to harness the sun’s heat and produce power up to eight times more efficiently than other devices based on solar thermoelectric technology.

The beauty of the device, according to MIT Professor in Power Engineering, Gang Chen, lies in its simplicity. Like a photovoltaic module based system, it has no moving parts. The device consists of a thermoelectric generator placed inside a vacuum chamber made of glass, covered with a black plate of copper that absorbs sunlight but does not re-radiate it as heat. The other side of the generator is in contact with ambient temperatures. Even when not in direct sunlight, the generator is capable of harnessing a temperature difference of 200 degrees Celsius between the interior and exterior of the system to generate electricity.

The concept "is very radical," Chen says, and because the MIT device requires much less expensive materials to manufacture than traditional solar panels, the cost vs. energy output could become a superior clean energy choice in the future once the technology is properly developed.

Li Shi, associate professor of mechanical engineering at the University of Texas at Austin, says the thermoelectric approach to solar power is "very novel, simple, and easy for low-cost implementation." The efficiency level they have demonstrated so far, at 4.6 percent, is "already quite impressive," he says.