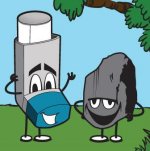 A newly launched web site claims solar power presents many dangers and problems that coal’s million-year buffering is designed to avoid. After all, coal power is solar power it says.

The logic behind that statement lies in the fact that coal is formed from decaying organic matter – and the sun provided the energy that organic matter needed to grow.

Such a statement is sure to raise the eyebrows of many familiar with solar technology and perhaps cause some very strong visceral reactions from environmental groups, but everyone can relax – the site in question is purely satire.

Touted as being a goodwill campaign on behalf of a major international coal company, Coal Cares offers fictitious “Puff-Puff” inhalers for free to any family living within 200 miles of a coal fired power generation plant.

The site also has a section dedicated to revealing the dangers of renewable energy that help “prove” coal production and consumption is one of the safest endeavours on earth.

In relation to solar power, it says the direct use of the violent fusion reactions occurring within our nearest star is the equivalent to mainlining the sun and we run the risk of overdosing. Concentrating Solar Towers pose a particular threat the page states, with the ability to “instantly fry an entire extended family or even village to death.”

Applying an exaggeration of the “butterfly effect”, whereby small changes can have dramatic results, the page claims the knock-on effects from the turbulence a large wind farm creates could unleash the equivalent of 63 million tornados.

The Coal Cares web site is very professionally presented and all in good fun, but with a more serious underlying message concerning the greenwashing of fossil fuels and the spread of misinformation about renewable energy technologies by parties with a vested interest in maintaining the world’s fossil fuel addiction.

While intended to be humorous, the company the site claims to represent is likely not laughing. Coal Cares could possibly keep some lawyers busy for a while.