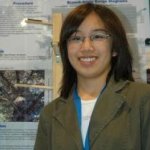 A 19 year old Princeton University student has won the Scotiabank EcoLiving Student Leadership Award for her invention – a $20 tracking rotation system that maximizes the output of solar panels so 40 percent fewer panels are required compared to stationary systems.

Solar tracking systems help to optimise the amount of energy harvested by solar panels by following the sun as it moves across the sky throughout the day. Solar trackers can be expensive systems that also require some of the electricity created to power the movement required, or involve complex wind-up mechanisms prone to failure.

Engineering student Eden Full, founder of Roseicollis Technologies, began working on a device while in high school called the SunSaluter. Developed primarily for the developing world, the system is driven by bi-metallic strips that expand during the day and contract as they cool at night; and in the process, move the solar panel to the optimal angle for capturing sunlight.

“When I realized that I could invent a technology for social good, I fell in love with tinkering with something that mattered,” said Ms. Full.

The SunSaluter is already being used in Kenya in two villages that have never had electricity before. The villagers use the system to recharge mobile phones and lanterns. Previously, lighting in these villages usually consisted of lanterns powered by kerosene – an expensive and polluting fuel.

With the SunSaluter, Roseicollis Technologies intends to raise awareness of solar technology being at the forefront of the alternative energy effort in the developed world and help electrify the developing world.

Ms. Full is also a recent recipient of a $100,000 grant from Facebook investor Peter Thiel’s project, the Theil Foundation 20 Under 20 Fellowship. In addition to the cash, Peter Thiel’s network of tech entrepreneurs and philanthropists will offer mentorship, employment opportunities, support, and training for a period of two years. Ms. Full was also 2009 recipient of the Weston Youth Innovation Award.