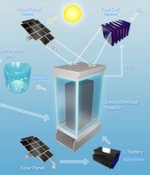 How we deal with our own waste is often a terribly resource intensive and polluting exercise. Reinventing the toilet, with the assistance of solar power, could save millions of lives, slash water use and even help power our homes.

Invented in 1775, the flushing toilet of today has changed little in terms of design and even now, 40 percent of the world’s population still don’t have access to basic sanitation services. Over 1 million children die each year through the lack of a basic technology which is now more than two centuries old.

The Bill & Melinda Gates Foundation are investing millions to help change all this. The foundation has announced it will be funding eight teams  to the tune of USD$3 million in the first year of a  “Re-invent the Toilet” challenge.

The foundation also announced $42 million in new sanitation grants that aim to inspire innovation in the capture and storage of waste, along with processing that waste into reusable energy, fertiliser and fresh water.

Environmental scientist and engineer Michael Hoffmann of the California Institute of Technology has received a grant under the initiative to build a solar-powered portable toilet prototype; designed to be used by up to 500 people per day and offering the added benefit of turning waste into fuel.

Professor Hoffman’s concept involves a rooftop solar panel that provides power to an  electrochemical reactor designed to break down water and human waste material into hydrogen gas. The gas product can then be stored in hydrogen fuel cells to provide a backup energy source .

It sounds like it would be an incredibly expensive toilet, but Professor Hoffmann says he can construct a workable unit for just $2,000 and that the cost could be brought down significantly if the toilets were mass produced; a critical factor for uptake in developing countries.

“Reinvent the Toilet Challenge” grantees will present their prototypes for judging and winning projects will receive additional funding from the Bill & Melinda Gates Foundation for further product development, industrial production and commercialisation.