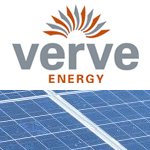 A 10 MW solar farm and a 55 MW wind power facility are to be built near Geraldton in Western Australia.

Mumbida Wind Farm and Greenough River Solar Farm will be constructed by Verve Energy, at a cost of over $200 million.

Mumbida Wind Farm will be a joint venture project with Macquarie Capital; with GE Energy and Leighton contractors supplying and installing the 22 x 2.5 MW GE wind turbines. The wind farm is expected to commence operations by the end of 2012 and will generate enough electricity to provide for the power needs of 35,000 homes.

The $50 million Greenough River Solar Farm project will utilise thin film solar panels and cover an area of approximately 80 hectares. The solar farm will generate approximately 28 GWh of electricity annually and reduce greenhouse gas emissions by 25,000 tonnes per year according to Verve Energy – the equivalent of taking 5000 cars off the road.

The projects will help Western Australia’s Water Corporation achieve its environmental goals for the electricity needs of the Southern Seawater Desalination Plant. Early this month, Western Australia’s Premier Colin Barnett announced that work will begin immediately to double the capacity of the plant so that it can provide at least half of the water needed for the Perth metropolitan area.

The wind and solar ventures will also provide a little relief for the Western Australian government in terms of its renewable energy targets. Last week, it was revealed that the state may not reach its goal of having 20% of its electricity produced by renewable sources by 2020; a situation that hasn’t been helped by the suspension of the state’s solar feed in tariff for new applications.

However,, Synergy and Horizon Power are continuing to buy surplus electricity exported to the mains grid from home solar power systems under the State Government’s Renewable Energy Buyback Scheme. Under the current arrangements, a 4kW solar power system installed in Perth can provide electricity bill savings of up to $1,360 annually according to information from Energy Matters’ web site.