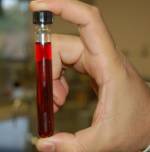 Dye sensitised solar cells work through processes sometimes referred to as artificial photosynthesis. They are made from low-cost and plentiful materials such as titanium dioxide and do not require complex manufacturing processes.

Predicted to be an inexpensive alternative to the silicon solar cells currently used in most solar panels, one of their limiting factors has been conversion efficiency.

However, these nature of these cells means they already have potential for indoor applications where a traditional solar panel just won’t work, by using ambient light rather than direct sunlight to generate power. They have also already been integrated into items such as solar backpacks.

According to a related press release issued by NCSU, DSSCs outperform conventional silicon photovoltaic by 20 to 40 percent under diffuse light, on cloudy or rainy days, and in indoor ambient light.

The North Carolina State University group, headed by Dr. Ahmed El-Shafei, an assistant professor in the Textile Engineering, Chemistry and Science department, say the new dye developed by the team should significantly boost the efficiency of DSSCs.

The performance boost represents another step towards dye-sensitised solar cells being used in conventional solar arrays and building-integrated photovoltaic products such as windows, facades and skylights.

A patent is pending on the new dye and the university is already in discussions with industry players about licensing use of NCSU-10.

Dye-sensitised solar cells are also known as “Grätzel cells”, after their inventor, Michael Grätzel. Grätzel received the Millennium Prize last year for his efforts in developing the technology.