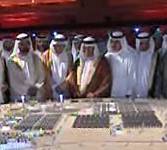 Dubai is embarking on a lengthy solar project of gargantuan proportions, with a similarly lengthy name to accompany it.

At an event announcing the project, Chairman of the Dubai’s Supreme Energy Council, Sheikh Ahmed bin Saeed Al Maktoum, stated the solar park will be constructed in a number of stages. The first stage of the project will see the solar farm’s capacity reaching 10 megawatts by 2013, with a total capacity of 1000 megawatts being in place by 2030.

The initiative is part of Dubai Integrated Energy Strategy 2030, which aims to achieve a 30 per cent reduction in energy consumption. In 2010, Dubai consumed around 33,000 gigawatt hours (GWh) of electricity and without intervention, energy demand is expected to increase by 5% annually.

In the Strategy, solar will still only play a minor role in the sun-soaked region – 1% of  overall energy production by 2020, increasing to 5% by 2030. By that year, 12% of electricity generation will come from nuclear power and 12% from so-called "clean coal" – a suite of technologies that require more energy and therefore more coal to be mined and burned. The balance will be sourced from gas-fired electricity generation.

Although Dubai’s economy was built on fossil fuel production, oil and natural gas now make up for less than 6% of the emirate’s revenues according to an entry on Wikipedia. Dubai’s oil reserves are rapidly being depleted and are expected to be exhausted in 20 years.

Part of the United Arab Emirates (UAE), Dubai is located south of the Persian Gulf on the Arabian Peninsula. Covering just over 4,400 square kilometres, the emirate is home to a population of 1.2 million people.  Collectively, the emirates have one of the largest carbon footprints per capita in the world.