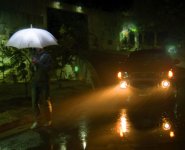 These days, we’re all pretty familiar with various forms of renewable energy such as solar power and wind, but perhaps the rain may hold potential as another alternative energy source.

Polyvinylidene Fluoride, or PVDF;  is a form of  polymer also used as a protective layer for solar cells – and more recently as part of a polymer solar cell itself. Due to itsa piezoelectric properties, i.e. the potential to generate an electric charge in response to applied mechanical stress, it can be utilized to recover energy from the impact of raindrops.

In a study published earlier this year, it was noted that a single large raindrop might generate up to 12 milliwatts of power using PVDF; by no means a large amount.

While rain power technology might not see us harvesting energy from the rooftops of our houses such as we can do with a home solar power system, it’s envisioned it could be used to power sensors and other small electronics devices in areas that experience reliable and high levels of rainfall. It could also be used in industrial air conditioning systems, where water condenses and drops like rain continuously.

Other ideas for using rain to generate energy relate more to hydro-electric concepts whereby water being discharged from downpipes on large buildings and stormwater drains could be utilised to drive turbines that generate electricity.

More novel approaches to utilising rain power include an umbrella covered in a PVDF material that would light up LED’s inside the umbrella as rain struck the fabric. The idea being that the harder it rains, the more dark it is likely to be and therefore the more useful the light would be – perfect for dark and stormy nights!