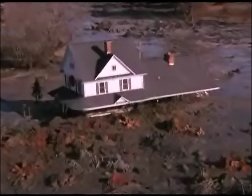 The coal industry has had a tough year image-wise, failing to convince many that “New Generation Coal” and low emissions technologies will succeed in greening the fossil fuel. The bad news keeps coming for coal after a massive coal ash sludge spill in central Tennessee, USA occurred earlier this week.

A containment wall holding back 40 acres of sludge created by the Tennessee Valley Authority‘s coal-fired power plant in Kingston burst, spewing over  2 billion litres of waste over 400 acres – more than the Exxon Valdez oil spill in 1989.

The power plant is situated on  the Emory River and video from the scene shows dead fish on the banks of the waterway. Footage also shows ash piled up nearly 2 meters high in some places. The cleanup is expected to take 4 – 6 weeks according to the TVA, but Greenpeace has stated that like Exxon Valdez, the spill could take years to clean up, and some of the damage to the ecosystem could be irreparable.

Kate Smolski, Senior Legislative Coordinator for Greenpeace believes that a criminal investigation should be launched into the incident and stated that it’s only a small example of the damage coal causes; be it “clean coal”, New Generation Coal or otherwise. “If we’re going to prevent disasters like this, we’ve got to complete the switch to truly clean energy like wind and solar power as rapidly as possible,” Smolski said.

Most of the focus on coal in recent times has been in terms of carbon dioxide and atmospheric mercury emissions, but coal ash sludge, a waste product from the combustion of coal,  and liquid coal waste from mining operations poses a different set of risks.

According to the Sludge Safety Project, coal sludge impoundments can store billions of gallons of liquid coal waste. The sludge contains carcinogenic chemicals used to process coal along with toxic heavy metals, including arsenic, mercury, chromium, cadmium, boron, selenium, and nickel. While these metals are naturally occurring in coal, they concentrate in the ash left over from the combustion process. This is of particular concern as low emissions coal technologies mean even higher levels of coal ash sludge being produced.

TVA stated as recently as recently as early today that "water sampling near the ash release area indicate that the concentrations of sampled contaminants either met or were below detection levels established by the Tennessee Department of Environment and Conservation to protect fish and aquatic life". The Environmental Protection Agency however, according to this CNN report just in, "has found high levels of arsenic and heavy metals in two rivers in central Tennessee that are near the site of a spill that unleashed more than a billion gallons of coal waste".