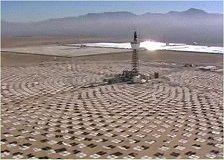 One of the biggest challenges of harvesting energy from wind and solar power is storage. Deep cycle batteries work well on a small scale, such as in off grid applications, but large scale installations don’t have many economical options for storing electricity generated when the sun isn’t shining or the wind isn’t blowing.

That’s where molten salt may hold some answers.

In a salt based solar power plant, the system utilizes tracking mirrors (called heliostats) that focuses the sun’s thermal energy on a receiver which sits on top of a tower.

The concentrated sunlight heats salt within the receiver to the point it becomes molten salt – temperatures well over 500 degrees Celsius can be attained. The molten salt is then pumped into a special thermal tank where it is stored until needed, maintaining 98% thermal efficiency up to several days.

From the tank, it is pumped to a steam generator, which drives a standard turbine to generate electricity. Effectively, the salt acts as a giant thermal battery and while the production of electricity utilizes a similar process to coal fired power generation; it doesn’t have the associated greenhouse gas emissions and other environmental issues associated with coal.

According to Solar Reserve, a pioneer in molten salt solar technology, the salt used in the process is an environmentally friendly mixture of sodium and potassium nitrate, the same ingredients used in garden fertilizer.

Solar Reserve believes that the system will be able to generate electricity at or below prices of fossil fuels such as coal or natural gas. The company recently received $140 million in additional funding and will have the first commercial scale projects under way by the end of 2010, with each project capable of providing electricity for up to 100,000 homes.