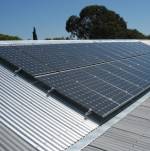 The latest (and final) round of funding under the Australian Government’s National Solar Schools Program (NSSP), which has already put rooftop solar arrays on thousands of schools, will be opening soon.

The NSSP assists primary and secondary schools around Australia take practical action to reduce emissions and electricity bills through installing solar power systems and other energy efficiency measures; while providing educational benefits for students in learning about renewable energy and environmental stewardship.

According to Energy Matters, a national solar power solutions provider that has assisted a number of schools via its commercial solar power division, this year will be the last chance to apply for the program; which opens on February 13 and closes on May 4. The company is encouraging schools to register initial interest in the NSSP with Energy Matters soon for further details and advice in regard to applying for funding.

Earlier today, Parliamentary Secretary for Climate Change and Energy Efficiency, Mark Dreyfus, announced the latest schools to receive grants  under the 2011-12 round.

In last year’s round, the Department received almost 2000 applications. From those applications, 784 schools across Australia were each awarded grants of up to $50,000. To date, 3,800 schools around the nation have been awarded grants under the program.

“The combination of renewable energy systems installed under this program will generate approximately 20MW of solar power – the equivalent of powering around 4,200 average households each day,” Mr Dreyfus said.

It should be noted that when the NSSP originally commenced, solar power systems were much more expensive – schools can now receive far more solar bang for their grant buck.

Applications for the National Solar Schools Program are assessed on value for money criteria, as well as environmental and educational benefits, with schools located in remote or low socio-economic areas received additional weighting. Applications for this year’s round will be assessed between May – June 2012, with grants being announced in July/August 2012.