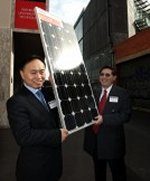 A team of researchers from Melbourne’s Swinburne University of Technology and Suntech have developed what they state are the world’s most efficient broadband nanoplasmonic solar cells.

Researchers from Victoria-Suntech Advanced Solar Facility (VSASF) at Swinburne had been initially improving silicon based thin film cell efficiency by embedding gold and silver nanoparticles into the cells. This they say increases the wavelength range of the absorbed light, boosting the conversion of photons into electrons.

Additionally, the team incorporated what are termed nucleated or ‘bumpy’ nanoparticles. These scatter light even further into a broadband wavelength range, leading to greater absorption and improved cell efficiency.

In a paper published in Nano Letters, the researchers claim an absolute efficiency of 8.1 per cent using the technology.

“One of the main potential applications of the technology will be to cover conventional glass, enabling buildings and skyscrapers to be powered entirely by sunlight,” says Swinburne Professor Min Gu, Director of the VSASF.

With further developments, Professor Gu expects 10 per cent efficiency to be achieved by the middle of this year and for the panels to be available commercially by 2017.

CEO and founder of Suntech, Dr Zhengrong Shi applauded the development, stating: “Our team has achieved an impressive milestone with the world record for the most efficient broadband nanoplasmonic thin-film cell. This is an important step in demonstrating the potential of nanotechnology in leading the next generation of solar cells.”

China-based Suntech is the world’s largest manufacturers of solar panels. Dr Zhengrong Shi has long had a close association with Australia. He is a graduate of the University of NSW and spent a considerable amount of time in Australia undertaking solar research before returning to China to launch Suntech. Last year the company celebrated its 10th anniversary and five gigawatts of Suntech solar panels having been installed around the world.

The Victoria-Suntech Advanced Solar Facility (VSASF) is a $12 million program jointly funded by the Victorian Government, Swinburne and Suntech.

In other recent thin film solar news, a  team of engineers from Cui Lab at Stanford University in the USA have created tiny hollow spheres of photovoltaic nanocrystalline-silicon to channel light; a development that could dramatically reduce the cost and consumption of thin film solar panel materials.