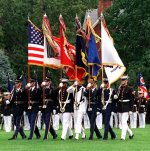 The US Department of Defense has set a goal of deploying 3 gigawatts of renewable energy capacity at the nation’s Army, Navy and Air Force installations.

The 3 gigawatt goal, enough to power three quarters of a million homes, will support the Department’s renewable energy target of 25% by 2025.

Also announced earlier today was the opening of a laboratory in Michigan to develop  fuel cell, hybrid system, battery and alternative fuel technology for the next generation of combat  vehicles.

Additionally, the Energy Department’s Advanced Research Projects Agency is to launch a competition centred on improving the capability of energy storage devices that can be used in the battlefield and for civilian applications.

The US armed forces is an incredibly thirsty beast, with the military responsible for gulping down 90 percent of the energy consumed by the federal government and accounting for about 2 percent of all U.S. energy consumption according to NYDailyNews.

An infographic published earlier this year highlights the scale of the consumption in modern theatres of battle. According to the publication, today’s wars require 16x more energy than they did in World War II due in part to increased mechanisation and use of technology. The Advanced Energy Economy infographic states a single typical marine combat brigade will consume half a million gallons of fuel a day in a battle scenario. The cost of protecting fuel convoys can be 15x the cost of the fuel, and in Iraq, one in eight casualties was related to the protection of fuel.

Generally speaking, the DoD estimates that for every $1 increase in the price of a barrel of oil, it incurs an additional $130 million in fuel costs.

US governments have often been accused of initiating conflict and engaging in various forms of subversion simply to ensure the securing of enough oil and associated infrastructure to feed the nation’s fossil fuel addiction. Some might see the military’s push for alternative and renewable energy not only a good thing for the environment, but also an important step in the pursuit of world peace and stability.