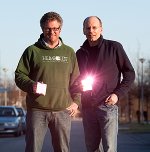 Solar cells for home solar power systems with conversion efficiencies approaching 40% are on the horizon thanks in part to Australian ingenuity.

The innovation, photochemical upconversion, allows for energy usually lost to be converted to electricity by utilising part of the solar spectrum currently unused by solar cells.

“We are able to boost efficiency by forcing two energy-poor red photons in the cell to join and make one energy-rich yellow photon that can capture light, which is then turned into electricity,” Associate Professor Schmidt said.

While emphasising their efforts so far are just the beginning, Professor Schmidt says the pathway is now clear to move toward the 40% conversion efficiency mark.

Professor Schmidt covers many areas of physical and theoretical chemistry, with a fundamental in molecular spectroscopy – the way molecules absorb light and the consequences of that absorption.

The research is being supported by the Australian Solar Institute, a $150 million Australian government initiative designed to support the development of photovoltaic and concentrating solar power technologies.

“Together, Australia and Germany can accelerate the pace of commercialisation of solar technologies and drive down the cost of solar electricity,” Mr Twidell said.

With solar cells used in standard solar panels designed for residential market currently attaining efficiencies of far less and overall panel efficiency less again; achieving 40% would see households being able to make even better use of their rooftop real estate for electricity generation.

The findings from Professor Schmidt and colleagues’ research have been reported in the Energy & Environmental Science journal.