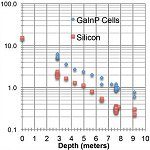 Are solar powered submarines on the horizon? Not quite, but solar panels that can produce electricity under water could soon be used for a variety of important aquatic applications.

Scientists at the U.S. Naval Research Laboratory, Electronics Science and Technology Division, are working on developing “high bandgap” solar cells with the ability to generate enough electricity to operate equipment such as electronic sensor systems at depths of up to 9 meters.

“The use of autonomous systems to provide situational awareness and long-term environment monitoring underwater is increasing,” said Phillip Jenkins, head of the NRL’s Imagers and Detectors Section. “Although water absorbs sunlight, the technical challenge is to develop a solar cell that can efficiently convert these underwater photons to electricity.”

While the use of crystalline silicon solar panels and amorphous silicon cells in aquatic environments has had some limited success, the major issues have been that not only is available solar radiation lower underwater, but the spectral content narrows. However, by matching a solar cell to the available wavelength range, the Navy has proven comparatively high conversion efficiency is possible.

The scientists have determined gallium indium phosphide (GaInP) cells are well suited for underwater operation given their high efficiency in wavelengths between 400 and 700 nanometers (visible light) and “intrinsically low dark current”, critical for high conversion efficiency in low light conditions.

The Naval Research Laboratory’s research to date has determined that at a maximum depth of 9.1 meters,  a square meter of GaInP cells can output 7 watts – enough to indicate there is useful solar energy to be harvested at that depth.

The Naval Research Laboratory is located in southwest Washington and boasts a staff of  2,500. Aside from marine-related technology development, it serves as the lead Navy activity for space technology and space systems development and support.