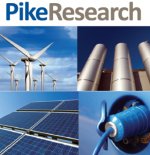 The research group’s “Renewable Distributed Energy Generation” report projects installations will reach 63.5 gigawatts (GW) capacity a year in 2017. Between now and then, close to 232 GW of distributed renewables will be added.

Pike points out the centralized model of power generation, transmission, and distribution “is growing more and more costly to maintain at current levels”, whereas renewable distributed energy generation (RDEG) sources such as home solar power have less need for transmission and  are “uniquely positioned to disrupt this traditional paradigm”.

Other benefits of a decentralised electricity generation system include the reduction of line loss associated with power transmission; which can account for up to 10% of electricity production. Solar panels also generate their peak electricity during peak consumption periods, bringing down the cost of wholesale electricity through what is known as the solar merit order effect.

Rapidly decreasing costs for renewable energy equipment will continue to contribute to eating into centralised energy generation’s lunch says Pike. According to the report, solar panel production capacity reached an estimated 50 GW by the end of last year and module costs dropped from roughly USD$4.00 per watt in 2006 to $1.00 per watt in 2011.

In 2009, Australia’s CSIRO stated broad adoption of clean distributed energy production technology could reduce the cost of Australia evolving into to a low-carbon country by as much as $130 billion by 2050.