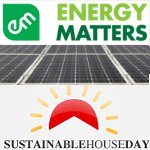 Sustainable House Day gives people an opportunity to look through houses that have been designed, built or renovated with sustainability in mind and talk to their owners.

Over 200 homes opened their doors to over 40,000 people last year to showcase renewable energy, recycling and other practices designed to lesson impact on the environment.

This year’s Sustainable House Day will be held this Sunday 9 September from 10am – 4pm at over 150 houses nationwide.

National solar provider Energy Matters is a major national sponsor this year and will have solar experts at the following locations to answer questions regarding going solar as a way of reducing a household’s carbon footprint – and to slash rapidly increasing electricity costs:

Those attending should look out Energy Matters flyers advertising a prize draw for a 1.5 kW REC solar power system or $3,000 towards a solar panel system of their choice.

According to a survey carried out by the University of South Australia (UniSA), 9 out of 10 people said they would make a change based on their attendance of the event. When contacted 10 months later, 75% of those people had made changes to their own homes; showing that Sustainable House Day is more than just an event – it’s a trigger for positive change.