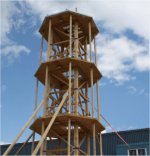 More steel is being used in the wind energy industry than in shipbuilding – it’s expensive and the production of steel is carbon intensive. Enter the timber wind turbine tower.

According to German company TimberTower GmbH, a 100m high tower made from wood can save approximately 300 tons of sheet steel. Additionally, emissions generated in the manufacture of the towers are offset by the wood itself, which acts as a  carbon sink.

The company says wood turbine towers also offer logistical advantages.  In some places, the height of a tower is governed by physical restrictions relating to roads and rules for transporting oversized loads. The TimberTower components can be transported to a site in shipping containers and the system allows for towers of up to 200 metres high to be constructed.

The TimberTower is manufactured from glued laminated timber panels made from spruce; which are assembled on-site into a closed, hollow body with a hexagonal, octagonal or dodecagonal cross section. The raw wood material is sourced from sustainably managed forests and is PEFC certified.

The manufacturing costs of the timber tower are reportedly substantially lower than those of traditional steel structures.

TimberTower is constructing the first 100m wooden tower for a 1.5 megawatt Vensys wind turbine in Hannover, Germany that will produce electricity for about 1000 households.

The company says its solution meets all current requirements for insurance, certification and fire protection regulations and guarantees a minimum serviceable life of 20 years. All materials used in the tower can be recycled.

Wood is also appearing in other wind turbine designs – earlier this year we covered the Hercules Wind Generator, which incorporates timber blades. Actually, wood has been helping humanity harness the power of the wind for centuries; originally being used for windmills that were once a common site in countries such as the Netherlands. These were used for milling grain for food production.