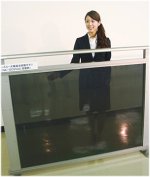 Sharp has released details of a new see-through solar panel that can replace windows and has other architectural applications.

Due to be commercially available in Japan from the beginning of next month, the translucent solar module offers a conversion efficiency of approximately 6.8%. This may not be a stunning figure compared to standard silicon solar panels, but it is impressive given the nature of the materials used.

The module can be used as patio glass, a skylight or in windows and also acts as a heat shield. Maximum power output is reported to be 95 watts. The overall size of the module is approximately 97.5 x 137 centimetres and is under 1cm thick.

Pricing and availability with regard to the Australian market has not been released as yet.

Sharp is currently celebrating 100 years of operations, but 2012 is by no means a salad year for the company. The company is reportedly slashing 11,000 jobs globally and will sell billions of dollars in assets.

Various media reports state the company will sell off Recurrent Energy LLC as part of its consolidation. However, this has not been officially announced by Sharp and Recurrent’s CEO Arno Harris says the business is solid.

“Recurrent Energy’s business is strong, profitable and growing. We continue to meet and exceed our business goals as we build out our contracted project portfolio.”

Sharp is no stranger to adversity – and bouncing back from it. In 1923, all its manufacturing plants were destroyed by the Great Kanto Earthquake.

Unlike many of today’s solar panel manufacturers, Sharp has long history in the solar sector; first commencing research and development of solar cells in 1959.

Like many of its other products, Sharp solar panels have a good reputation in Australia for excellent performance and reliability under our often harsh weather conditions.