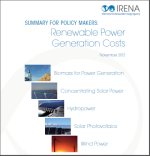 A new report from the International Renewable Energy Agency (IRENA) states renewables have become the most cost-effective method of electricity generation for hundreds of millions of people worldwide who do not have access to mains grid power.

“A renewable revolution is underway,” says  IRENA’s Innovation Director Dolf Gielen. “Recent years have seen consistent, sometimes dramatic, falls in the cost of electricity from renewables – making it the cheapest option off-grid, and even on-grid in places with plentiful resources.”

Here’s how various renewables stack up:

– Biomass power generation from waste is producing electricity for as little as USD 0.06/kWh.

With regard to solar panels, the IRENA report says solar PV is set to achieve grid parity with residential electricity tariffs in many locations around the world. The organisation says PV based electricity generation costs typically range from USD 0.16 to 0.36/kWh.

“The message is clear: renewable energy today is often the cheapest option to meet rising demand for electricity – even without subsidies,” said Mr Gielen. “It is also healthier, and better for the environment. A renewable energy future is now bankable, and there are further cost reductions to come.”

In Australia, those cost reductions have already arrived.

According to information from Australian solar provider Energy Matters, including the cost of a 3.99kW system the company currently has on special, electricity works out to cost  as little as 4.41c per kilowatt hour depending on the state of installation; thanks in part to the Solar Credits multiplier subsidy that is about to be abolished. That works out to less than 15% of some retail electricity rates.

IRENA was founded in 2009 and has its headquarters in Abu Dhabi and is made up of 158 member states and countries, including Australia and the European Union.