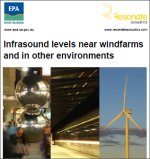 South Australia’s Environment Protection Authority has released a report showing infrasound levels at homes near wind turbines is no greater than what is experienced elsewhere.

Infrasound is sound that is lower in frequency than 20 Hz (Hertz), which is lower than the “normal” limit of human hearing.

Infrasound is a point seized upon by some anti-wind farm campaigners as a contributor to “Wind-Turbine Syndrome“, a mysterious affliction said to cause psychological issues and physiological problems such as insomnia, headaches, tinnitus, vertigo and nausea.

In the EPA study, undertaken in conjunction with Resonate Acoustics, infrasound levels were recorded at seven locations in urban areas and four locations in rural areas; including two residences approximately 1.5 kilometres away from wind turbines at Bluff Wind Farm and Clements Gap Wind Farm.

Commenting on the report, Clean Energy Council Policy Director Russell Marsh said, “The results of the EPA’s report show that the real contributors to infrasound are things like air-conditioners, traffic and urban office environments – not wind farms. This is great news for clean and safe renewable wind energy and further reassurance for communities near wind farms.”

In January last year, Australia’s Climate And Health Alliance (CAHA) stated “There is no credible peer reviewed scientific evidence that demonstrates a link between wind turbines and direct adverse health impacts in people living in proximity to them.”

The report on infrasound levels near wind farms and in other environments can be viewed in full here (PDF).