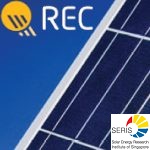 The potential-induced degradation (PID) resistance test, certified by the Solar Energy Research Institute of Singapore (SERIS), subjected the solar panels to a negative voltage of 1,000 volts in an ambient temperature of 60°C and a relative humidity of 85% for 96 hours.

After the gruelling test, the panels demonstrated less than two percent power degradation. REC’s solar panels are already certified to the TÜV Rheinland standards, in which a negative voltage of 1,000 Volts is applied to the panels at 25°C for a period of 168 hours.

“We are very proud to be one of only a few manufacturers passing the PID test at this protocol and doing so with such excellent results,” said Luc Graré, Senior Vice President Solar Sales and Marketing, REC. “Consistent high yield, quality, and durability are of utmost importance in today’s market and our outstanding performance in this demanding test clearly demonstrates that REC solar panels are among the best in the industry.”

While solar panels are sometimes considered much of a muchness these days, it remains that not all solar panels are equal. A module may display satisfactory performance under Standard Test Conditions (STC), but this occurs in solar irradiance of 1,000 W/m², solar spectrum of AM 1.5 and cell temperature of 25°C.

Modules may be tweaked to perform well under STC; but real-world conditions may be quite different, particularly in Australia. Under our often harsh conditions, panels that performed similarly under STC may vary wildly in their efficiency when put into service on a rooftop.

“This certification ensures that REC offers customers, developers, banks and investors all over the world, solar panels that perform in accordance to REC’s warranty in the most demanding of climates,” says part of a statement from the company.