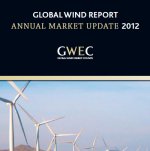 Worldwide installations of wind power grew by 10 percent in 2012 and with the exception of 2013, this trend will continue over the next five years according to latest figures released by the Global Wind Energy Council (GWEC).

The GWEC’s Annual Market Update (PDF) sums up the state of the industry at the end of 2012, along with a detailed five-year forecast of the wind energy market through to 2017.

It predicts steady global growth throughout the period, mainly on the back of emerging large-scale wind power coming out of China, Brazil, India and Latin America.

In 2012, global installed wind capacity reached 282.5 gigawatts, with the USA and Europe breaking records for new installed capacity, contributing to a total of 44.8 gigawatts of new wind power worldwide – up 10 percent from 2011.

A slight downturn is forecast in 2013, before the market returns to growth and wind power continues its march to parity with fossil fuels.

“Wind power may be variable, but the greatest threat to the continued stable growth of the industry is the variability and unpredictability of the politicians who set the frameworks for the energy sector”, said Steve Sawyer, GWEC Secretary General.

In the U.S., an extension of a Production Tax Credit on new wind projects will slow growth in that country, while the report states Europe’s record installations in 2012 are unlikely to be repeated in 2014 as a result of policy uncertainty and backtracking, which is undermining investor confidence in new ventures.

But despite these obstacles – which Sawyer points out include “fossil fuel subsidies which last year amounted to an incentive to emit CO2 of about $110/tonne” – the global wind market is expected to grow by 13.7 percent out to 2017, with capacity nearly doubling to 536 gigawatts.

“…all of the fundamentals which have driven wind power to date are still in place: energy security, price stability, local economic development, climate change mitigation and local air and water pollution issues; and wind is now competitive in an increasing number of markets,” said Sawyer.