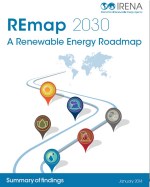 The International Renewable Energy Agency has released REmap 2030, a roadmap to more than double the share of renewable energy by 2030.

The study is the first on global renewable energy potential to be based on data from official governmental sources and encompasses 26 countries, including Australia.

In 2011, the United Nations Secretary-General launched the Sustainable Energy for All (SE4ALL) initiative that includes a goal of doubling the share of renewable energy in the global energy mix by 2030.

The bad news is that unless countries take suitable action now,  the world will increase the share of renewable energy from 18 percent today to only 21 percent, instead of a potential 36 percent or more.

The good news is the technology already exists to achieve the goal – and surpass it by quite a margin.

REmap 2030 is IRENA’s solution for how the world can work together to achieve it.

“REmap 2030 is an invitation to countries to forge the renewable energy future most appropriate to their circumstances, informed by the most comprehensive and transparent data available,” says IRENA’s Director-General Adnan Z. Amin.

“This summary will be supplemented by a more comprehensive report, followed by a series of country and issue-specific studies. The whole REmap initiative will continue to evolve and expand over time.”

The report points out subsidies for renewable energy can be completely phased out if greenhouse gas emissions and other forms of air pollution are reasonably priced.

“Renewable energy is not an option. It is a necessity. REmap offers a pathway to make it happen,” says Mr. Amin.