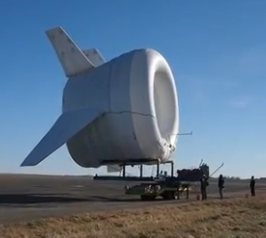 Altaeros Energie says it is set to break the world record for the highest wind turbine ever deployed.

We’ve covered Altaeros Energie in the past in relation to its 11 metre scale model of the Altaeros Airborne Wind Turbine (AWT); which ascended around 100 metres above the ground.

The next generation – the BAT (Buoyant Airborne Turbine) – will see the Altaeros BAT set at a height of just over 300 metres above the ground and will be the first long-term demonstration of such a device.


The BAT uses a helium-filled, inflatable shell to lift to high altitudes where winds are stronger and more consistent than what is experienced by traditional tower-mounted turbines. A lightweight conventional three-blade, horizontal axis wind turbine is fixed within the shell.

The BAT is held steady by tethers that also transmit electricity down to the ground. Ground station winches control tether speed and length, and align with the shell to prevent tethers from tangling.

The ground station is built onto a trailer platform for ease of transport and rapid deployment. Shipped in 2 shipping containers, the BAT can be installed and generating power in under twenty-four hours.

Altaeros Energies says the BAT can generate over twice the energy of similarly rated tower-mounted wind turbines and reduces the second largest cost of wind energy – installation and transport – by up to 90 percent.

In addition to generating clean energy, the BAT platform can also be used to expand internet phone services and weather monitoring.

The system doesn’t require on-site personnel once in place – it can be monitored remotely, requiring only periodic maintenance checks.

Altaeros Energies is a wind energy company formed out of MIT. The BAT project is partially financed by the Alaska Energy Authority’s Emerging Energy Technology Fund.