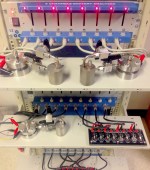 KAir’s Battery innovation is an energy-efficient and cost-effective large-scale stationary potassium-air (K−O2) battery system. The cost to produce KAir Battery’s solution is half that of the U.S. Department of Energy (DOE) long-term target of USD $150 per 1 kWh. KAir Battery says it the battery offers an unprecedented energy efficiency of 98 percent.

“It gets better, at the end of these batteries’ lifetimes the by-products are non-toxic and recyclable,” says Damian Beauchamp, a chemistry graduate student at OSU.

KAir says its batteries are 78% cheaper to produce compared to competing products.

The team has set a goal of releasing a 1kWh battery with a 2000 cycle life on the market by December 2017.

In addition to the DOE Clean Energy Prize of $100,000, the team has also been invited to Washington D.C. to compete in the 2014 Clean Energy Business Plan Competition in June; an event that could open very important doors for KAir Battery.

Similar to the Australian Technologies Competition, the National Clean Energy Business Plan Competition seeks to promote entrepreneurship in clean energy technologies. The DoE says winners of the competition have gone on to launch dozens of start-ups, create 120 jobs and raise more than $26 million in follow-on funding.

KAir Battery LLC also recently won the Ohio State Business Competition. The prize was $15,000 and free office space for a year at TechColumbus.

Mr. Beauchamp says his work was inspired by a paper on the potential of Li–O2 batteries.

Some of the other novel/emerging energy storage system technologies we’ve covered in the past: