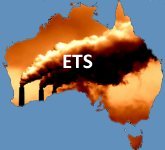 Australia’s Carbon Pollution Reduction Scheme, which was to be operational from next year, will now be phased in from 1 July 2011. The Rudd Government has also repackaged the scheme to try and win support for the controversial program, which has been heavily opposed by both green groups and industry.

1. A delay in the start date of the Carbon Pollution Reduction Scheme of one year in order to "manage the impacts of the global recession."

5. The establishment of Australian Carbon Trust to allow households to play a greater role by investing directly in reducing Australia’s emissions and to drive energy efficiency in buildings.
.
6. A commitment to reduce carbon pollution by 25 per cent of 2000 levels by 2020, pending global co-operation

According to the government, Australia will meet this 25 per cent target by harnessing the CPRS, the expanded Renewable Energy Target, and with substantial investment in clean, renewable energy and energy efficiency and strategic investment in controversial carbon capture and storage technologies.

The announcement yesterday was met with a mixed, but generally negative response. Greens Senator Bob Brown said the decision jeopardises the future of international agreements on climate change and believes the Federal Government is moving to secure a trigger for a double dissolution election over its emissions trading scheme.

While oil and gas producer Woodside’s Don Voelte called the changes "lipstick on a pig",  other big Australian polluters gave a cautious welcome to the Government’s changes.