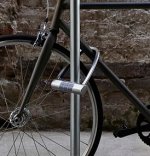 The SkyLock intelligent bike locking system is creating a huge amount of buzz with bike owners around the world.

With bicycles these days sometimes worth thousands of dollars; theft is becoming an increasing problem. In the USA, approximately 1.5 million bikes are reported stolen each year.

All sorts of locking systems are available, but SkyLock is a system with some very interesting differences.


Through Bluetooth technology, Skylock offers ‘keyless entry’ by connecting to a bike owner’s phone. Skylock senses the owner’s approach and automatically unlocks – or it can be unlocked by tapping a button on the lock’s phone app.

Skylock contains a lithium battery that is recharged by small solar cells embedded in the lock barrel casing. The makers state an hour of sunlight will provide enough power for a week. In the unlikely event of the battery going flat, the device can be unlocked  by entering a combination on the capacitive touch buttons.

The battery has an expected life of around 6 years with normal use. If the lock is stored where there is no sunlight and assuming the battery is fully charged;  it will take around 250 days to fully discharge

Skylock also has some other novel features. Through the use of Wi-Fi or Bluetooth; it can notify the owner if their bike is disturbed. It can even notify preferred contacts if the owner is involved in an accident. If there isn’t an open Wi-Fi network available, an “electronic leash” can be created with Bluetooth.

The device can also be used for creating bike-sharing programs. Users can arrange to loan their bike to anyone in a trusted network or the Skylock community while keeping track of it via the app.

The price of the device is currently USD $159; which compares favourably with other high-end locking devices. Pre-ordering is available; but SkyLocks won’t be shipped until early next year.