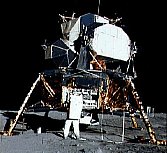 Given solar power’s recent spike in popularity, many might think that solar panels are a relatively new development.

The photovoltaic effect, which is the physics behind the solar cell, was discovered by Alexandre-Edmond Becquerel  in 1839. While it would be some time before solar panels as we know them today would make an appearance; probably their first high profile uses were in relation to space exploration.

The Pioneer 1 satellite in 1958 carried the first body-mounted solar panels and Explorer 6 was another solar powered satellite that in 1959 provided the first photo of Earth from space. However, arguably their most famous early application was the Apollo 11 moon mission in July 1969 that placed the first solar panel on our nearest celestial neighbour.

As part of the Apollo 11 Early Apollo Scientific Experiment Package (EASEP), the Passive Seismic Experiment was a self-contained instrument powered by solar energy. The solar cells were developed by Spectrolab Inc., who remain the world’s largest manufacturer of spacecraft solar cells today.

The PSEP consisted of two solar panels, an antenna and communications system to send data, a passive seismometer designed to measure seismic activity and physical properties of the lunar crust and interior, and a lunar dust detector, to measure dust accumulation and radiation damage to solar cells.

The equipment was deployed by astronaut Buzz Aldrin, who experienced problems deploying the PSEP as one of the solar panels did not open correctly. It was turned on by ground command on 21 July 1969 while the Apollo 11 astronauts were still on the surface of the moon. On 27 August 1969, the EASEP no longer accepted commands from Earth stations and the experiment was terminated.

The Surveyor probes were solar powered, and Surveyor 1 soft-landed on the moon on 2 June 1966, over 3 years before Apollo 11. The even earlier Ranger probes were also solar-powered, so one could technically argue that the first US solar panel to land (rather heavily) on the moon was attached to Ranger 4 on 23 April 1962. (Thanks to Ben B. for pointing this out).